Natural catastrophes in Spain have insurance cover under a dual consideration, depending on the nature of their cause. While hail and other direct effects of precipitation, landslides and snow avalanches, ground subsidence or damages caused by the wind with speeds below 120 kph. are directly covered by the private market, those with wider potential impact are covered by the so-called Extraordinary Risk Scheme.

Risks included under the Extraordinary Risk Scheme are both natural and man-made. As for natural risks, flood (riverine, pluvial and coastal), earthquake and tsunami, winds exceeding 120 kph. and tornadoes, as well as meteor strikes, are included. Man-made risks include terrorism and other forms of socio-political unrest.

The Spanish Extraordinary Risk Scheme is the result of an agreement between the private and public sectors, being the participation of both of them essential to make the scheme work.

The Extraordinary Risk Scheme is managed by the Consorcio de Compensación de Seguros (CCS), a state-owned company that, apart from handling this scheme, performs many other  different duties at the service of the Spanish insurance industry. 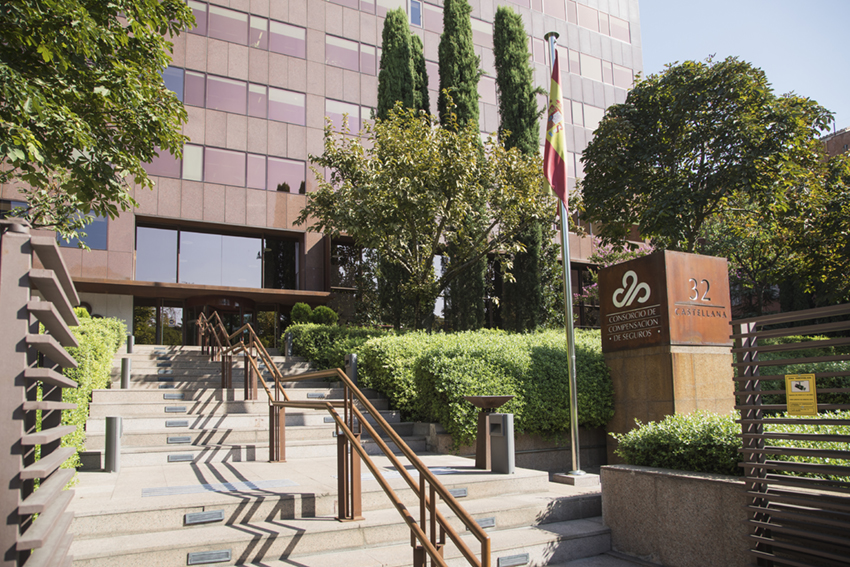 The key to understanding the scheme is that in Spain it is compulsory to extend the cover of most insurance lines (property –residential, commercial, industry, civil works and motor and railway vehicles-, personal injury and business interruption) to cover the specified “extraordinary risks”. Only policies in the third-party liability and other classes such as transport, aircraft, marine, agricultural and travel insurance are excluded of this obligation.  The scheme is financed through a surcharge applied to all policies eligible for the scheme that depends on the insurance line, the kind of asset to be insured and the insured value. For instance, the rate for residential properties is 0.007‰ of the insured value, meaning that a house insured for a capital of 500,000€ would pay a surcharge of 35€ to be added to the commercial premium that the policyholder pays to the commercial underwriter which, in every case, is the one in charge of issuing the policy. Private companies transfer monthly the surcharges collected to CCS, as well as the information required about policies, less a 5% processing fee.

Although virtually all policies have the extraordinary risks covered by CCS, it’s worth mentioning that CCS is not a monopoly and that CCS cover is a default one. All or any of the stated extraordinary risks can be covered by the private company issuing the original policy, but that wouldn’t exclude the policyholder from paying the surcharge, as the overarching principles of the scheme are solidarity and mutualisation of these risks among all policyholders, avoiding adverse selection and a widespread penetration of catastrophe insurance all over the country. CCS pools very different risks under a single scheme in order to provide an affordable, flat rate, providing cover to all policyholders in the lines stated above. CCS covers properties in Spain, and business interruption linked to those properties when this kind of insurance is also contracted. As for personal injury, CCS cover Spanish policyholders from events considered “extraordinary risks” anywhere in the World.

In the event of a claim caused by one of the “extraordinary risks”, CCS indemnifies policyholders directly –hence, CCS is a direct insurer and not a reinsurer- on the terms and conditions, and for the same amounts contracted with the private company with which he or she underwrote the original policy. To file a claim, policyholders can contact CCS directly, or through their broker or insurance company. Cover is automatic, doesn’t need any declaration of disaster by the authorities and has no upper or lower limit. CCS applies some deductibles to commercial and industrial properties, as well as to civil works, but doesn’t apply any to residential properties, motor vehicles or for personal injury. As for business interruption, CCS applies the same deductibles that were stated in the original policy.

In general, 93% of all losses paid by CCS for Extraordinary Risks during the last 30-year period were due to natural catastrophes, being flood the most important one, amounting to almost 70% of all losses. As for insurance lines, 97% of all losses were in property lines, 2% in business interruption (taking into account that this line was only included in the Extraordinary Risk Scheme in 2004) and 1% in personal injury.

With the income from yearly surcharges (after tax), plus the revenue from financial and real estate investments, CCS builds an equalization reserve with which pays claims. There is a state guarantee (never being invoked along CCS’ long history) and there is also the possibility of CCS being reinsured, although the current level of the equalization reserve is deemed to be enough to face the risks of its responsibility.

Additional information on the Extraordinary Risk Scheme can be found here. As well as about CCS’s other functions and yearly report.